Re-opening on the 11th of January 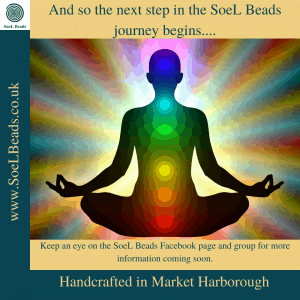 So I’ve discovered reiki, well not discovered it obviously, more like I have welcomed it into my life.
Of course reiki isn’t new and I’m pretty sure most people would’ve heard about it, but this is how it found me…….(This is where the dreamy music takes us into a flashback scene).

Anyone who knows me knows that I love my business. To me, SoeL isn’t just an income, it’s a dream come true and it’s a constant reminder of how much I’ve achieved since being told otherwise, but that’s a whole other story which we will get to another day.

So for the last year or so I’ve been frustrated about what I can do with the business, I love everything about it so I didn’t want to change what I have, I wanted to add to it with something meaningful and something special for now and the future.

I’m not naïve enough to think that I will be sat making my jewellery in my 70’s, I hope that SoeL Beads will still be sought after and loved but it’s more than likely going to be my daughter and others who will be running it for me and I plan on having several shops by then, but still I have been racking my brains for ages as to how I can build on what SoeL already has.

I could’ve just added lots more stock, the latest crazes, the newest fads etc, but that’s not what SoeL is about, I’ll leave that to the gift shops, SoeL is a lifestyle, it helps people, it brings comfort and happiness and I never want that to change.

I love the fact that customers come to me again and again because they trust my advice and expertise and that what they buy will actually make a difference to their lives.
They know that I am not just out to make a quick buck and will only sell them something or recommend something because I believe it is what they need.

So it’s because of this that I have been pulling my hair out as to what I can add that will fit in with me, SoeL and my customers.

So a few weeks ago I was sat at home boring Laura again about the shop, my plans, the future blah blah blah, between you and me I’ve a feeling that she wasn’t paying me that much attention. We had put Liv to bed, made a brew and sat down to watch ‘Modern Family’, have you seen it? It’s hilarious, a good watch to wind down with at night before bed.

Anyway there was this one episode where the 2 guys who live together look out and see a bloke in their hot tub, they’re going to go and chuck him out but he stands up out of the water stretching and they’re gazing at his six pack, the next thing you know, it cuts to them sitting in the hot tub with him………. I was still mulling over what to do by the way, the mind never stops.

So they’re sat in this hot tub and one of the guys, Cam, says something about his arm hurting I think, and the stranger tells him to hold the arm out straight and he proceeds to move his palms up and down the arm, just hovering an inch away from the surface. The other guy, Mitch, asks him what he is doing and he replies……. Can you guess? Yayyyy you’r right, it’s Reiki!!!!!!!!!

My mind honestly felt like it was going to explode, this was it, I’d found it, just like that it found me, Laura I said, it’s Reiki, that’s the missing link……….

Now when you you mention things like reiki, crystal healing, meditation etc most people automatically think it’s some kind of hippy thing or religion, well it’s not.

I, for the record, do not label myself, I’m not a Christian, catholic, Buddhist, hippy etc. I do love the teachings of the bible, when I was a young boy I went to school in Malta, a nuns school, and I fell in love with all the stories then. But as I said, I am not practicing any religion, I enjoy all the good bits taught in all the religions. I also believe that I am being guided through life and I have faith in that, I mean surely I haven’t been put through so much crap for nothing have I? But I do like to keep my religious and political thoughts mainly to myself.

Anyway back to Reiki, there it was and it hit me like a bolt of thunder. I told Laura all about how I believe reiki is what I have been searching for and how it could help me personally as well as helping me to help others, the excitement was overwhelming.

The next day I set about doing my research into learning reiki, how to find the best teacher, how it can help me in my life etc. Wherever I looked I saw things about reiki, and every time I looked further into it, it somehow kept taking me back to same teacher, Fay Johnstone.
I checked her out some more and I was extremely impressed, not only did she have a great back story but she had also published several books about plant reiki, she was living her dream.

So I contacted Fay, got on great with her and enrolled in her course, this was it, the first step on my new journey into life with Reiki energy.

As I now embark on my reiki level one adventure and learn how to channel this energy, or my magic as Liv calls it, I will keep you updated along the way here in my blog.